tl;dr quick summary
At Peerigon, transparency is highly valued. Both diversity and openness are understood as cornerstones of our corporate culture. Our salary model should also reflect this, which is why, on the occasion of the German Diversity Day 2021, we want to take a good look at ourselves: Is there an internal gender pay gap? How does it arise? Can the unequal treatment be avoided? We want to provide space for an analysis of this topic in a blog post on Diversity Day and thus stimulate fruitful discussions both within the team and externally.

Disclaimer: We present the issue of the gender pay gap in a very binary way due to the data situation. This is at no point intended to exclude any other gender.

Let's get started right away with some hard facts:

We believe that creating awareness of these facts and being transparent helps taking action and to change things for the better. To get a good understanding of the topic and explain our approach we'll have to clarify some terms:

The unequal pay of the sexes is measured in the so-called Gender Pay Gap. Also often referred to as the Gender Wage Gap. This classifies the percentage difference between the non-deductible wages of all men and women within an organization or geographic area. This general comparison is referred to as the unadjusted gender pay gap. If, in turn, the more comparable factors of a worker's field of activity and education are included in the classification, we can speak of an adjusted wage gap. It is important to emphasize that the gender pay gap is purely a calculation to which variables can be added and removed. Thus, especially in the case of the adjusted pay gap, the factors and expert assessments that are taken into account differ greatly depending on the source.

What does it have to do with diversity and with Peerigon?

Especially in the IT sector, there is a lack of gender parity. This is often the first issue to be recognized as an issue of diversity although we know there are many more dimensions. (Follow-up with our blog post about diversity as part of the corporate culture if we got your attention here).

Earlier in this post, we already saw the high unadjusted pay gap in Germany. Shockingly, the gap for the IT sector taken in isolation is even higher: 25%. 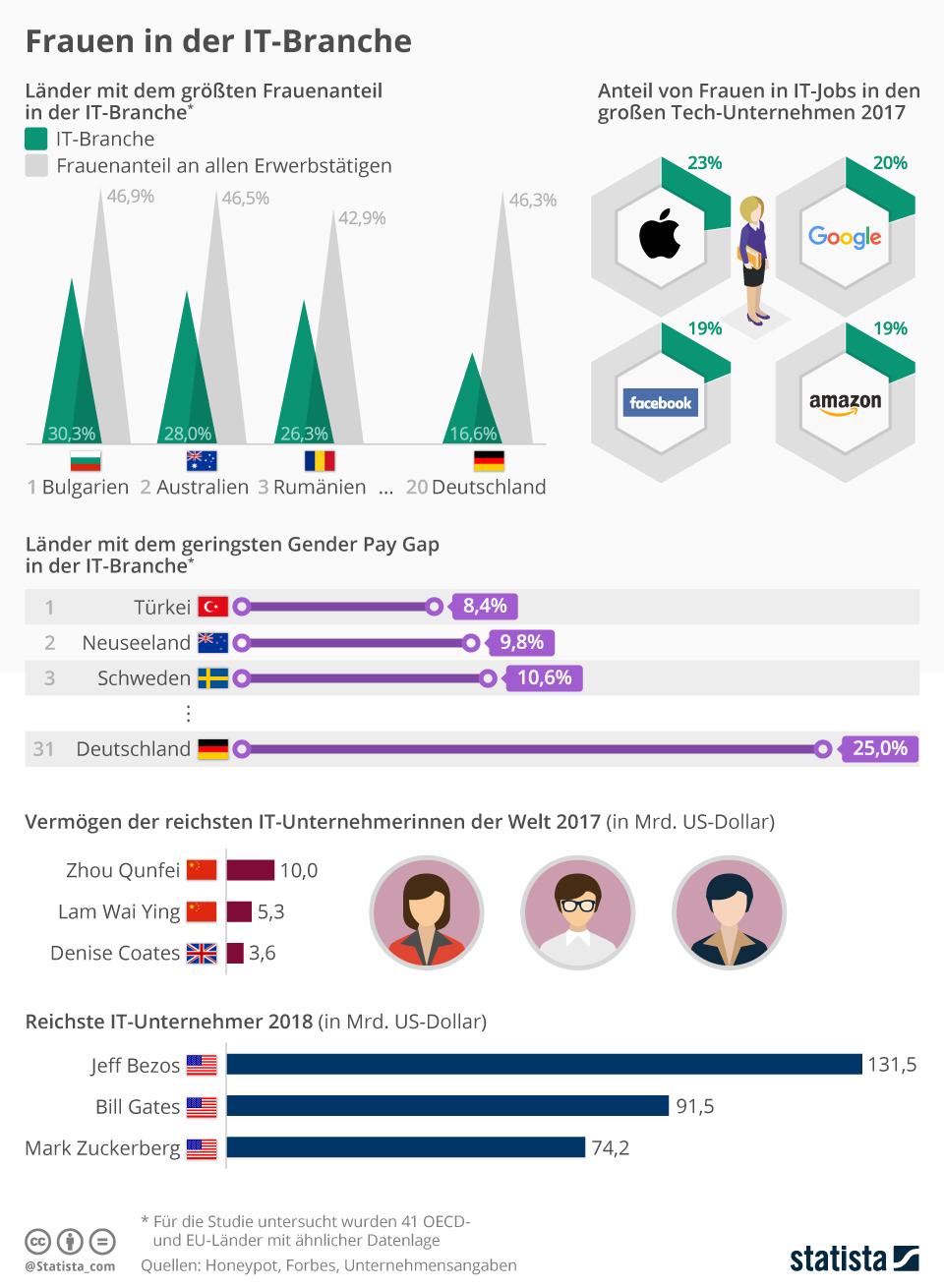 This discrepancy is due to a variety of reasons and can only be reduced by turning all the screws. 🛠 To get a rough idea of the Gender Gap spiral:

There are fewer women studying STEM subjects and thus underrepresented within the sector. This leads to fewer women in leading positions, even without taking into account the general underestimation of women's abilities. These women are then also missing as role models for the next generation of female developers. Not to be forgotten, the fact that women are also more likely to quit tech or have longer times of absence because of care work. ... To name only a few co-dependencies shaping the gap, which are well described for example in the article Women in tech statistics: "The hard truths of an uphill battle"

The question arises as to why women with the same qualifications generally earn even less and why a value that deviates from the 0% is accepted. We definitely won't accept it. Let's look at our numbers.

We based our calculation of the Pay Gap on the definition of the german federal statistical office:

We think of this as our unadjusted Pay Gap. Since Peerigon can take the "field of activity" into account, we are approximating the adjusted gap. Nevertheless, we deliberately do not want to focus on the fully adjusted gap - with our current wage model this should be 0%!

We factored in the following to calculate our unadjusted Pay Gap:

So let's do some plain talking: Where does our gap come from? With our current pay gap calculation, we didn't have a well-defined way to take into account the different work experience of a Peeri. Also, all our women developers started in lower levels (working student or trainee), but not all men did. Based on this, when we would calculate the fully adjusted wage gap and anticipate our new salary model (to be implemented soon) where skill levels are well defined (and thus calculable), we expect it will indeed be zero. Nevertheless, we wanted to address the topic and to cross-check: have unequal treatments in salary decisions perhaps crept in after all? If we consider the arguments listed previously in conjunction with our gap, we can say with a clear conscience that this did not happen.

Looking ahead, we also see an obstacle in the general application process, where men are in general quite confident and might apply to jobs where they don't fulfill all criteria, whereas women with the same qualification shy away. (This problem is rooted in a place that is difficult to address from us, but it's relevant to keep it on the radar and take measures 🕵️)

Recently there has been a bit more talk & show of how salary models or the connected career ladders work. It's important to understand the context and how to apply these models. Ultimately, such a model should help to clarify expectations on all sides...and to reduce the gender pay gap to 0. Because otherwise, the new model would be a failure. We are looking forward to share more details on our new model iteration in a future company culture blog post.

As we were aware there might be a difference, we are happy that the Wage Gap is rather small and we can explain the probable causes from our perspective. We hope the gap disappears when we introduce the new salary model in our company. Now it's time to ask yourself (and your leadership): Is there a Wage Gap in your company? How big is it? And what are possible reasons for it?

There are some very good articles and statistics, in addition to the sources already linked. You can continue reading here, for example: Gender Pay Gap Situation in the EU

Learn more about our self-conception and values

Peerigon is about the people

Lessons learnt about working from home before it was mandatory

We can make a difference