Like any other web developer out there, my job predominantly entails searching Google a hundred times a day to find answers to whatever the next roadblock is. Usually the result is just a Stack Overflow link or Github issue, but sometimes it’s a thoughtful article or blog post that goes the extra mile by providing context and commentary. I’m sure you’ve had the same experience before, but here’s the twist: have you ever stopped to think that these posts come from full-blown websites? And they publish helpful articles and tips regularly?

I jest, but too often we engage with this quality web development content exclusively through search engines. If we did our SEO job right, maybe it was even a Google search that brought you here. The impetus for this blog post was me realizing I wasn’t digging deeper into these sources, which means I was simultaneously failing myself and the content authors by ignoring their hard work.

As a result, I wanted to ask my better-disciplined coworkers what links they find themselves returning to and compile a list to share with you. So here are our 20+ favorite sources of juicy web dev info we keep close to our hearts – and our address bars. 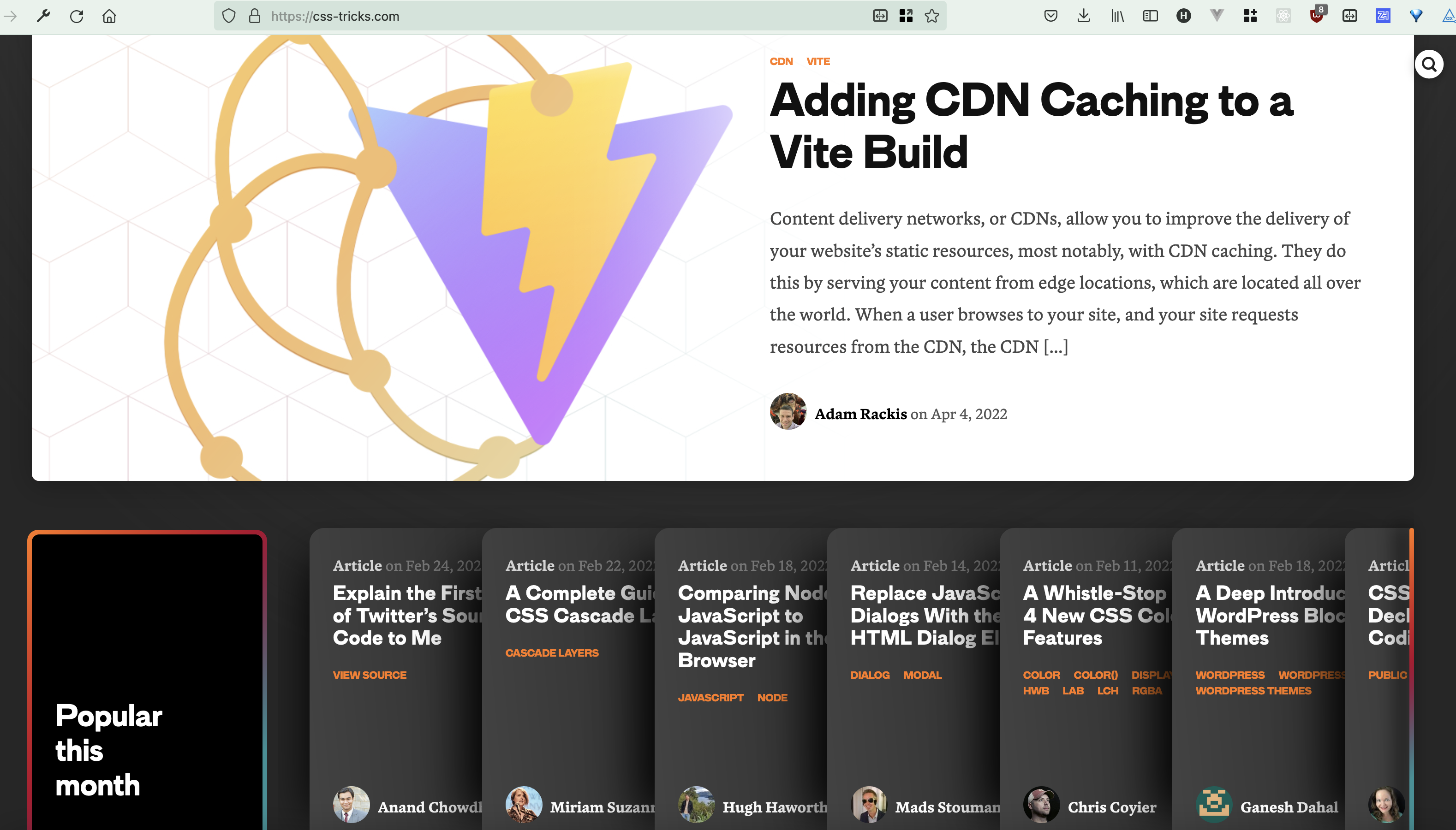 Ah, what better way to follow talk of being led by search results than with CSS Tricks, a site that seemingly has an article for every CSS hurdle one may encounter. That breadth of content means there are times you look at the front page and nothing is personally relevant, and CSS Tricks is definitely open to the opinions of guest writers that may be hit or miss at times. But we have a few developers here who check it regularly, and I should probably do the same.

It is also worth noting that the site was recently acquired by Digital Ocean, which has bought other cool tech blogs of yore such as Scotch.io and Alligator.io, and the results until now have been mixed. But in this case, the goal seems to be only large Digital Ocean logo placement.

Josh is an incredible developer, and an excellent resource over the last year thanks to his course "CSS for JS Developers", aimed at those like me who’s web dev career has dealt heavily in front-end yet through the lens of JavaScript. The course studies the somewhat hidden logic of CSS in a playful way, and his blog carries over that same energy in his more or less monthly deep dives. Whether it’s his course, his blog, or his Twitter account, give Josh a look. 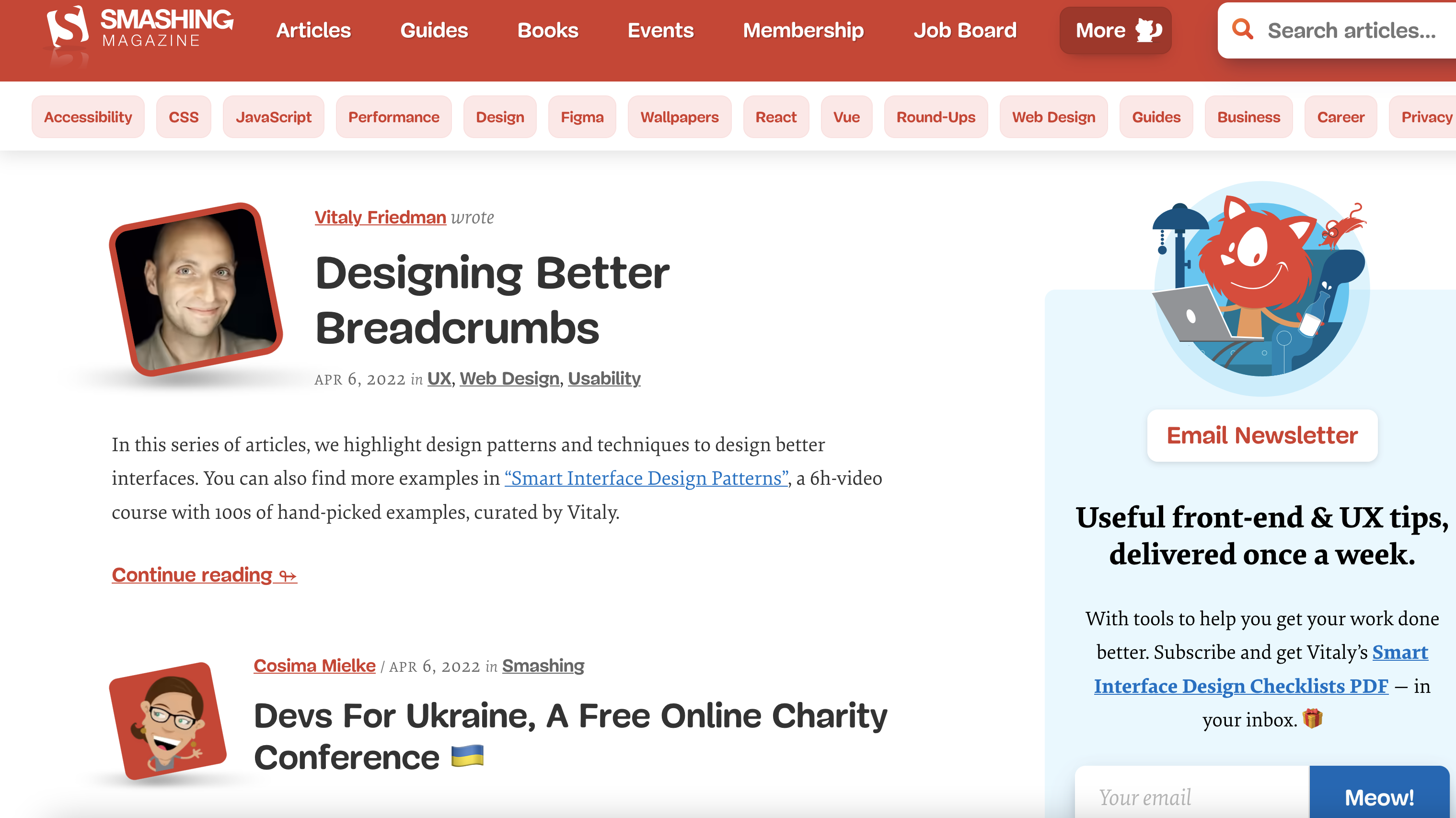 Similar to CSS Tricks but covering a fuller stack, Smashing Magazine (as far as I know never a magazine) has been independently publishing web dev articles, guides, books, and newsletters for over 15 years. Bonus points for being based out of Germany.

I’m not sure what the schedule is nowadays because it seems like the frequency of posts has dropped a bit. But I am actually a supporter of his Patreon, because he publishes really good stuff. For a lot of popular tech writers their primary source isn’t the spec but another news source when changes are made to JS/CSS, but that’s not what he does. As soon as a new spec is posted, he’s on top of it.

If Josh's blog is great at covering the different angles of a CSS topic, developer Ahmad Shadeed's blog will get as granular as a specific CSS property or function. His personal site is somewhat new to me, but I was particularly inspired by this post on anticipating CSS quirks before they happen

We are probably experiencing right now the post-peak phase of the second rebirth of newsletters, largely fueled by the paid newsletter service Substack. I have believed for years now that we are going to return to an era of more curation as the internet continues to over-saturate us with mediocre content – hey, if even I can get a blog post published... – and that’s what newsletters offer us.

Web developers have played a part in the newsletter boom, providing curated lists of links to announcements, tooling, and blog posts they find significant. The newsletters recommended below have been around for a few years now, and should be checked out while we are lucky enough to still have them running.

Note: Pretty much every newsletter I have seen at this point allows you to preview older issues, so you can get a sense if it interests you without putting your email on another list. 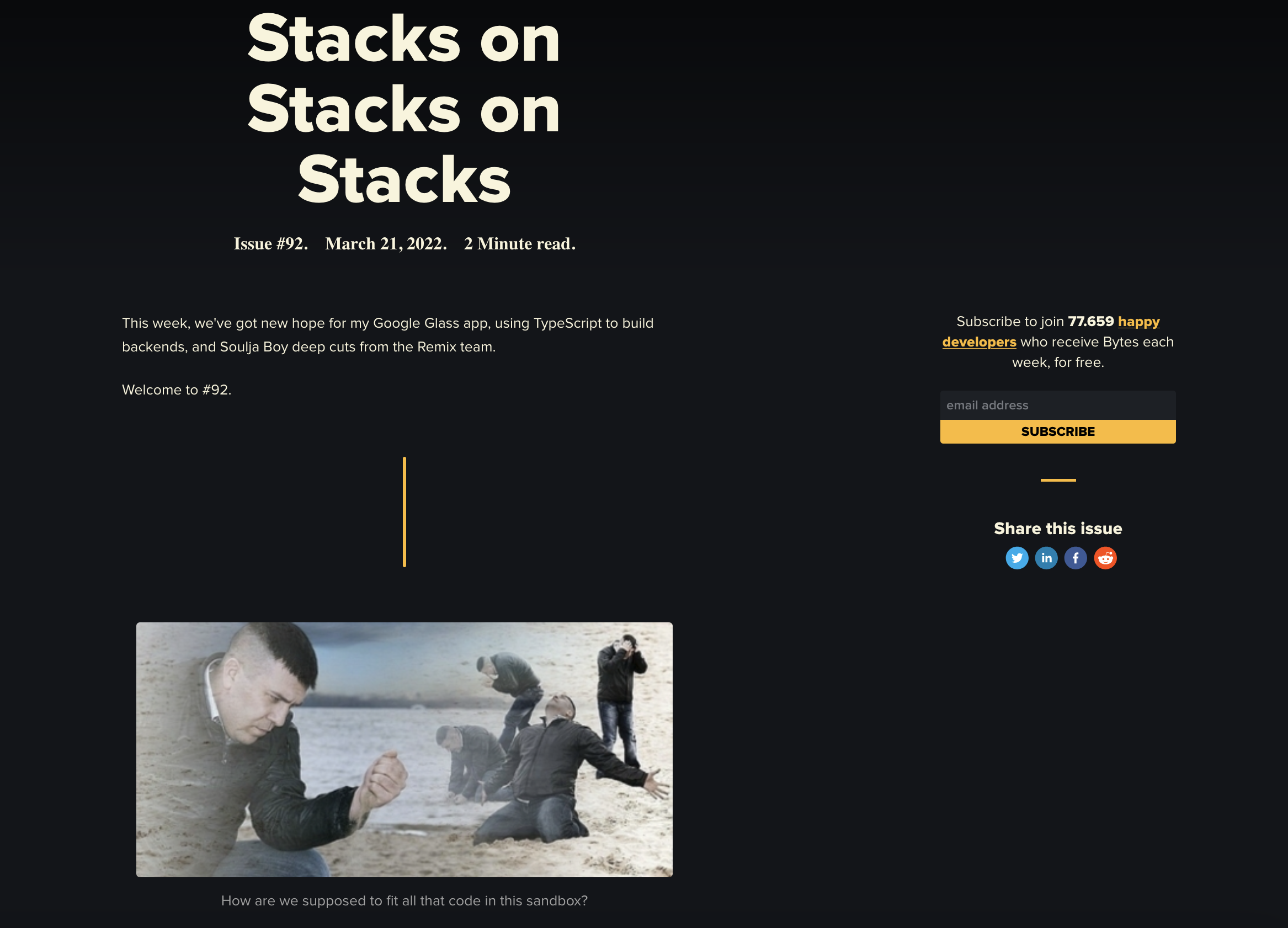 This is my absolute favorite find from talking to my co-workers, several of which already subscribe. Written by Tyler McGinnis (who seems worth a Twitter follow in his own right), the newsletter is a combination of web dev news, experiments with different libraries, and whatever else floats his boat all with his personal takes on top. To pick a random example as I scan through back issues of the newsletter:

7+8. Rendezvous with Cassidoo and The Overflow

Both of these newsletters are curated by developer Cassidy Williams aka “cassidoo”. Her personal newsletter is lighter while still bringing some useful web links and features an interview question and random joke of the week. Plus she’s into mechanical keyboards which is a rabbit hole I am dangerously close to falling down. The Stack Overflow newsletter in comparison is strictly a collection of links, a good portion of which are from their own blog. I haven’t looked that deep into the Stack Overflow content yet, but maybe it will be of interest to you!

SSR, ISR, SSG, CLS, TTFB ... there are countless acronyms to make your website fast. To help keep track, I like to dive into the perf.email newsletter. It’s a good roundup on performance, which is increasingly crucial for our customers but is rarely given enough attention in blog content. It’s also a neat bit of marketing for Calibre – a great product to help monitor app performance. Curated by Calibre developer Karolina Szczur, it releases every two weeks which is a nice rhythm for a newsletter.

Let’s cover all the design sources together.

OnePageLove, a favorite of Irena’s in particular, celebrates the beauty and simplicity of One Pagers and shares screenshots with commentary of author Rob Hope’s favorites. Dribble is a giant community for designers to share their work and gain inspiration from others. We appreciate Stephanie’s blog and newsletter for its focus on accessibility and UX, as well as social issues in web dev and more. Plus she has even featured a Peerigon blog post in the past! 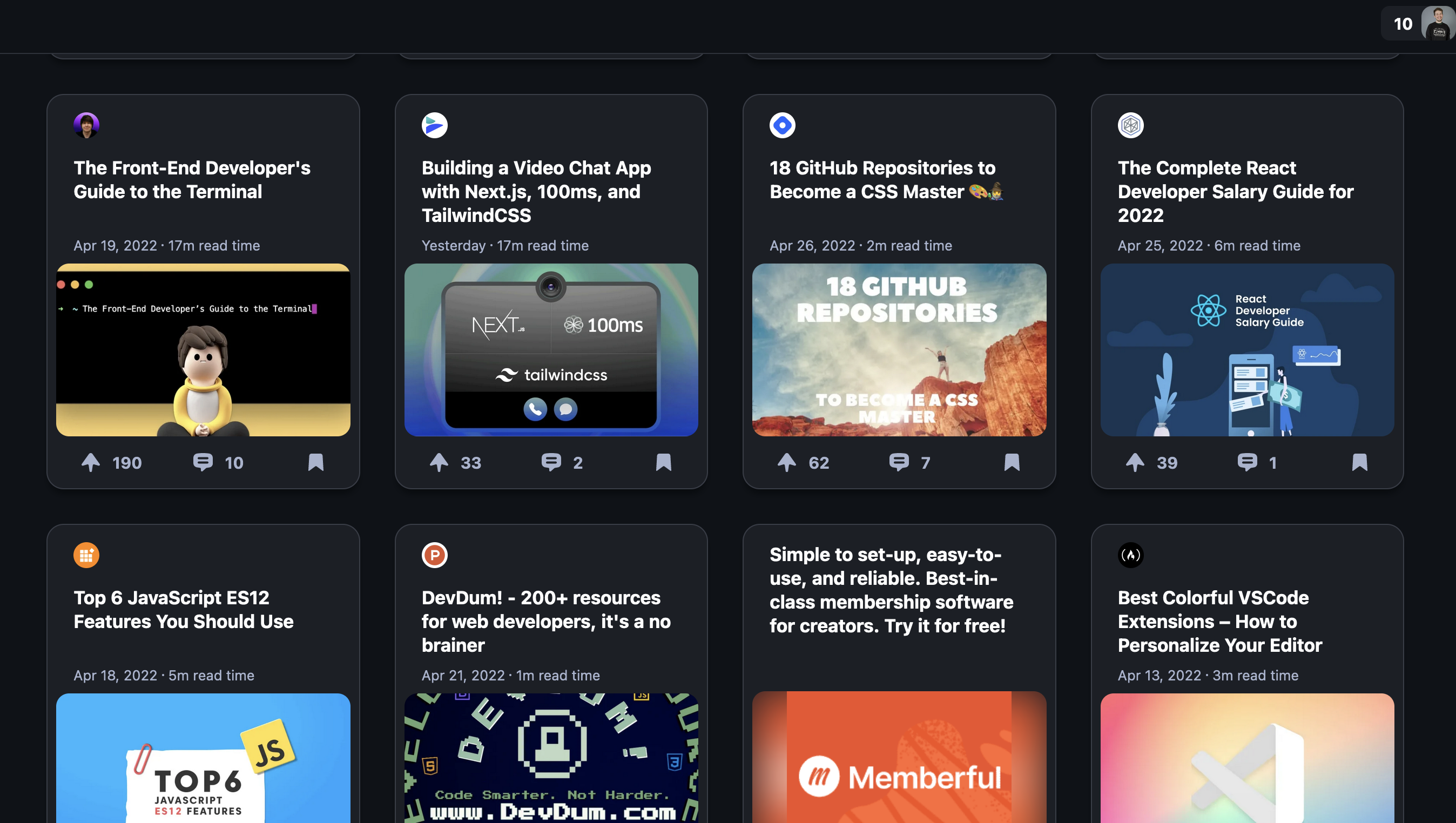 This one I actually discovered doing research on Reddit and it can only be described as the master aggregator of development content. Daily.dev is a browser extension that takes over your new tab screen and pulls from over 400 sources based on the tags you choose to follow. There is a community aspect to it as well, and yes, it even aggregates the aggregators like HackerNews for you sickos who are into that kind of thing.

Before we pivot away from the realm of the traditional written word, I thought I would re-visit a way to collect all of these in one spot. Remember the glory days of RSS readers? If you think about the way content operates on the Web today it makes sense why they spent much of the last 10 years on their last leg. But they aren’t dead yet, and hopefully the Newsletter boon will spill over to RSS. In addition to the market leader Feedly, Feedbin (which I have tried as seen in the screenshot below) and Inoreader have their fans. As you can see, all of these sources in this article have RSS feeds you can subscribe to!

And speaking of RSS feeds, let’s talk about their main function nowadays: podcasts. 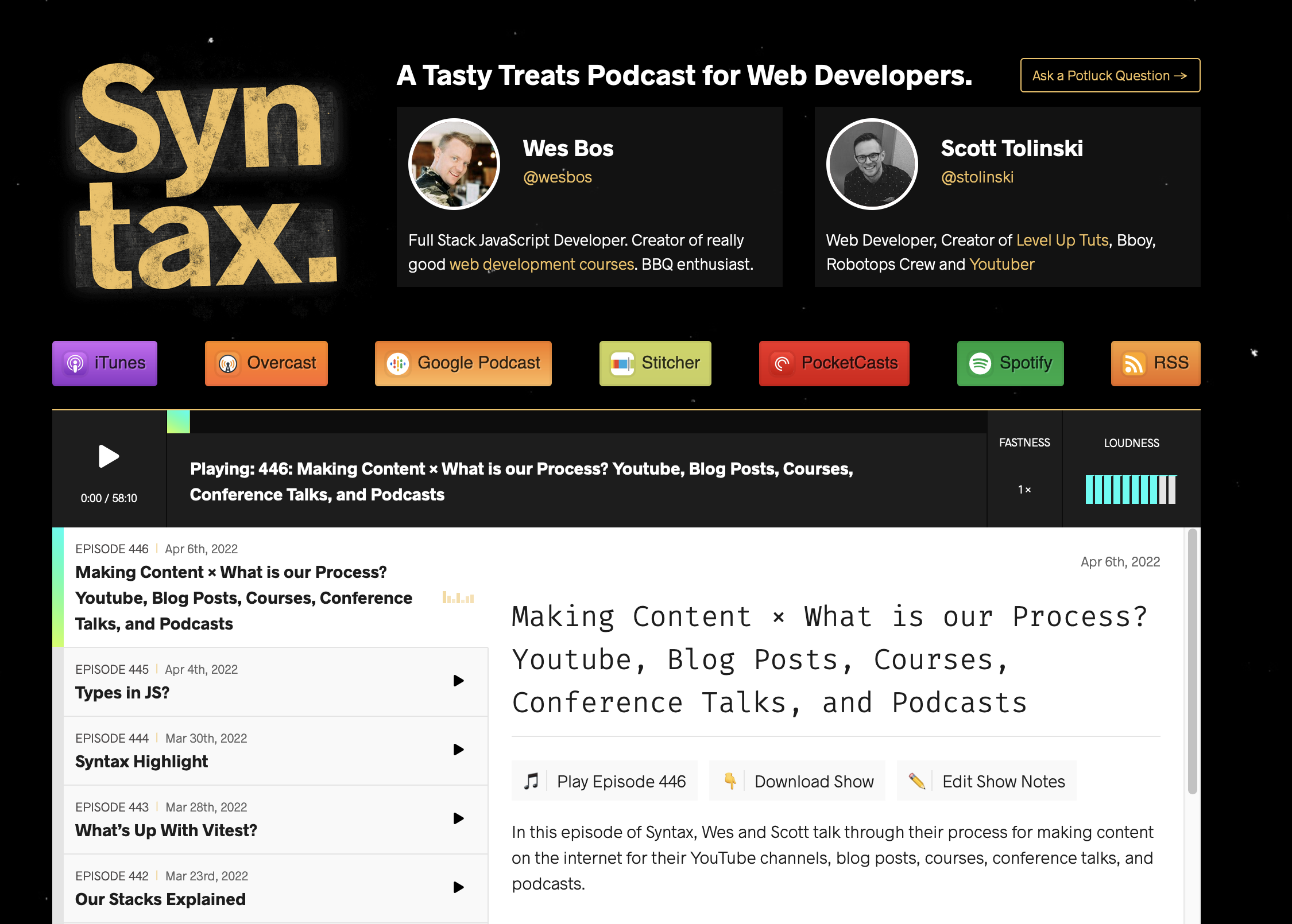 Both great JavaScript instructors in their own right, Syntax is Wes Bos and Scott Tolinski’s long-running web dev podcast comprised of short, focused, and above all else accessible episodes on different (predominantly front-end) topics. This is the one resource I would recommend above all to younger developers and like any truly great podcast, it has timestamps. 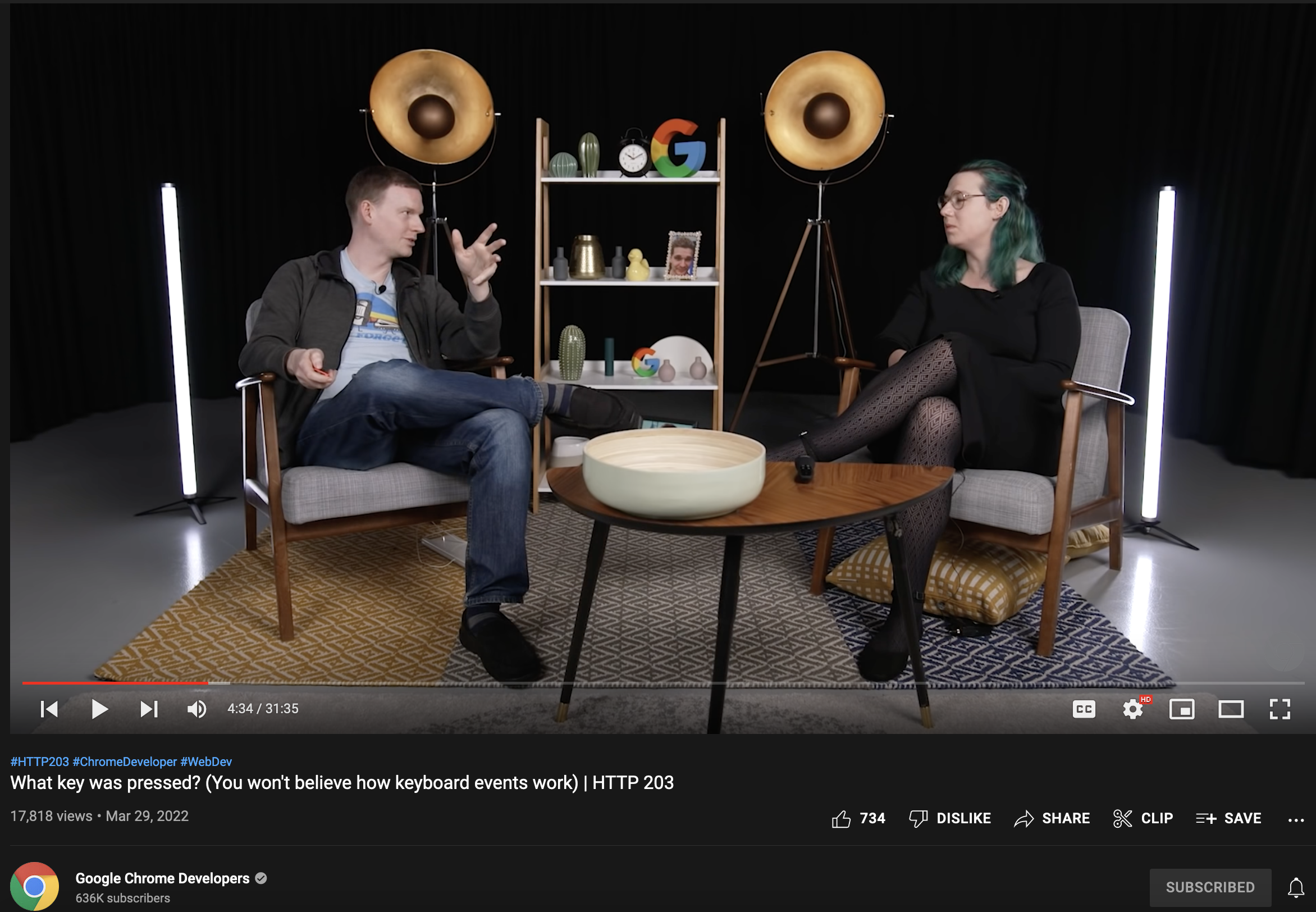 HTTP 203 is a great middle ground between fun and high quality discussions on web development topics. These can range from ‘shiny new features to the smallest details’. The show is hosted by Chrome developer Jake Archibald and uploaded to YouTube by their ‘Google Chrome Developers’ channel.

Check out this repo for additional tech podcasts. Front End Happy Hour is one in particular I have seen praised by many.

Twitter is my aggregator of choice. It’s true that there are a lot of bad people on this platform, but that's more of a general internet problem and we wont talk about it here. A few of my favorite people on Twitter worth mentioning are below. To highlight one in particular, when we want to lookup or learn something new about accessibility we have a look at Sara Soueidan’s blog. So naturally her feed is a great place to be updated with the newest topics concerning a11y. 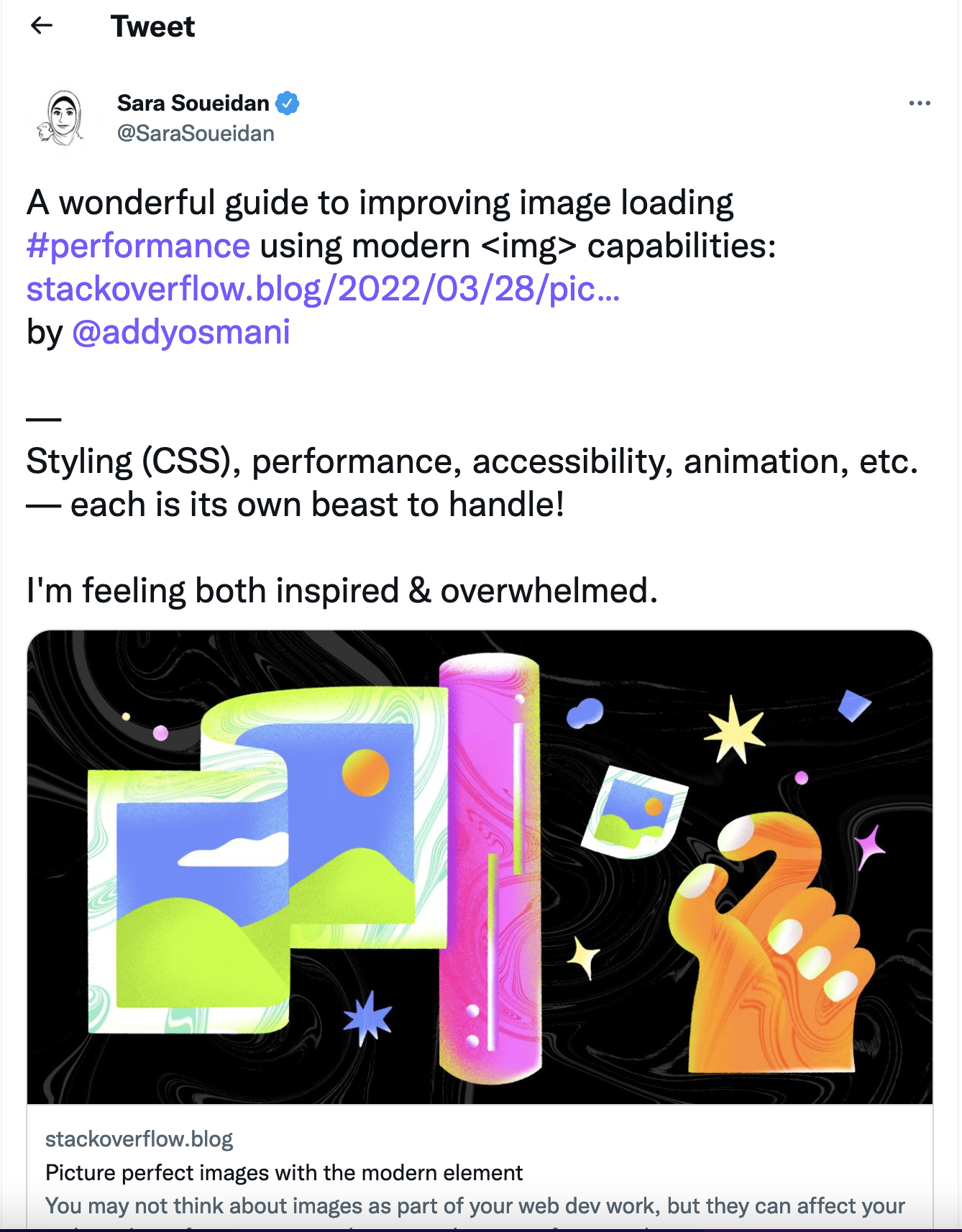 Now that I take a step back and look at this list, it is certainly a bit focused on front-end. But that only makes sense considering it was compiled by Peerigon employees whose jobs have us spending most of our time on that side of the stack. But I think there’s a little something for any developer in this list, and I hope there’s at least one new name that has piqued your interest. And if nothing else, maybe I can remind the internet that newsletters, RSS, and good content aren’t dead yet!